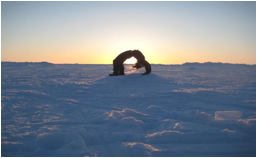 The polar bear  population is estimated   to be 20,000-25,000, and is divided into 19 subpopulations (Figure 2). These are based on tag returns from harvested animals, capture-recapture and data from radio and satellite telemetry studies. Contrary to these depicted boundaries, polar bears are known for their ability to travel great distances and to have variable home ranges at magnitudes of 964,264 km2. Whether this ability translates into genetic admixture of polar bears is but one component of my study.

The Hudson Bay complex of subpopulations is my focal population and consists of Western Hudson Bay (WH), Southern Hudson Bay (SH), Foxe Basin (FB), and Davis Strait (DS). This complex contains approximately 5000 bears with WH and SH subpopulations at the southern edge of the Canadian polar bear range. This project is centered on determining the presence of population structure at a finer level than previously explored.

To address this objective I seek to answer the following questions:

The first question involves the single nucleotide polymorphisms (SNPs). This high resolution genetic marker has the ability to detect the presence of population differentiation to a greater degree.

The second question takes advantage of radio collar data collected for WH, SH, and FB and relates where females are located during the breeding season to their genetic profile.

This project will resolve the genetic state of this complex of subpopulations and provide insight on how movement on ice during the breeding season influences population differentiation. Overall this project aims to integrate techniques in order to better understand the interaction genetically and ecologically in this population.

I graduated from Queen’s University in 2011 with a Bachelor of Science (Honours). During my senior year I contributed to project examining the use of non-invasive sampling of polar bears in the M’Clintock Channel.  Post-graduation I took a gap year to gain experience in the field. During this time I worked as a field research assistant in Nunavut with Queen’s University, volunteered at the Koffler Scientific Reserve at Jokers Hill with the University of Toronto, interned at the marine mammal research unit of a non-profit organization on Maui, Hawaii and volunteered on the R/V Melville research ship with Scripps Institute of Oceanography and University of California San Diego before arriving in Edmonton, Alberta to begin my Master’s program.