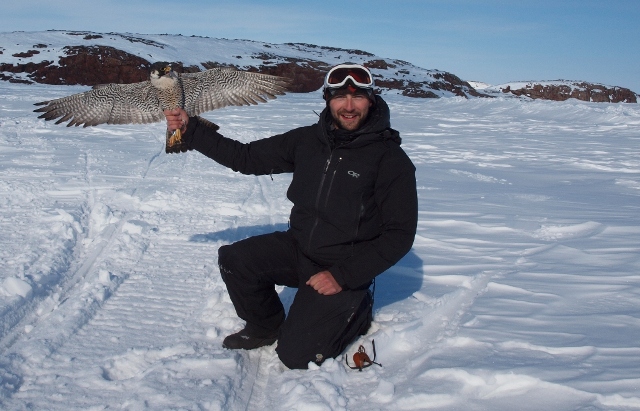 Peregrine falcon (Falco peregrinus) populations around the world experienced massive declines during the 1960s and 70s due to organochlorine pesticides moving up the food chain, causing egg shell thinning. The deleterious effects of these pesticides on the Arctic peregrine falcon (F. p. tundrius) – a subspecies that breeds in the Arctic regions of Canada, the USA, and Greenland – received less documentation than other subspecies. However, tissues taken from Arctic peregrine falcons breeding around Rankin Inlet, Nunavut, in the early 1980s indicated that organochlorines were present in Canadian Arctic ecosystems. Yearly monitoring of the Rankin Inlet population has been ongoing since 1982, and data show that pesticides loads have been declining and are now below toxic threshold levels. Nevertheless, the number of chicks produced by this population is declining each year and the specific cause is unknown. Our research group (www.arcticraptors.ca) is currently examining a series of hypotheses to determine the cause of the decline in productivity.

For my PhD research, I am working with Government of Nunavut biologists to establish a study complimentary to that in Rankin Inlet, 800 kms further north near the community of Igloolik. Our overarching goal is to determine the influence of variations in prey abundance on the breeding behaviour and foraging ecology of Arctic peregrines falcons. Arctic peregrines feed on a variety of prey including song, shore and marine birds, and small mammals, but little is known about how peregrines select from this assortment of prey as the availability of each prey population fluctuates and how these fluctuations influence breeding performance.  My PhD dissertation will include 4 main research questions:

1.     Which landscape features do peregrines use to select foraging sites and how do they select from a variety of prey types?

2.     How do variations in different prey assemblages influence breeding behaviour and performance?

3.     Does stress induced on the wintering grounds and during spring migration north to the breeding grounds influence breeding behaviour and performance