Mark is currently the Curator of Mammalogy at the Royal Alberta Museum in Edmonton, Alberta. 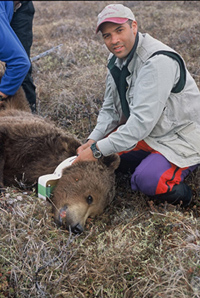 Adjusting the size of a GPS/Argos linked telemetry collar on an adult female grizzly bear in the Mackenzie Delta, NT

For barren-ground grizzly bears (Ursus arctos) in the Northwest Territories (NWT), the Mackenzie Delta represents both their northern boundary and the future location for the proposed Mackenzie Gas Project. Here, the arctic climate, flora and fauna are influenced by the Mackenzie River that flows north to the Arctic Ocean. The area is characterized by long
winters and short, cool summers. Numerous lakes permeate the region and pingos (a low hill or mound caused by hydrostatic pressure in areas that are underlain with permafrost) are conspicuous features on the landscape. Grizzly bears in this area undergo 6 to 7 months of winter dormancy and low biological productivity in the area makes these grizzly bears especially vulnerable to anthropogenic disturbance and climatic change. Over the past 3 years there has been a significant level of oil and gas exploration in this area and plans are in place to construct a pipeline through the Mackenzie Delta to ship natural gas to southern markets. Relatively little information is available for this north-coastal population but with increasing resource-extraction and human activity, grizzly bears in the Delta will come under increasing pressure. 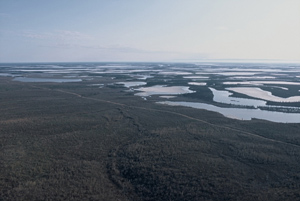 A hair sample and a claw shaving are collected for carbon (13C) and nitrogen (15N) stable isotope analysis to determine trophic position and the marine vs. terrestrial dietary composition

Wildlife Management in the Inuvik Region with support from the Inuvialuit Game Council initiated a population study in fall 2001 to obtain current information on the numbers, distribution and movements of grizzly bears in the Mackenzie Delta – east to the Nunavut border. Within the development area there is a need to assess the impacts on local and regional grizzly bears resulting from increased hydrocarbon-extraction and associated activities. In 2001, the Department of Resources, Wildlife and Economic Development obtained movement and activity data for 4 grizzly bears in the development area. In spring 2003, 10 GPS (Global Positioning System) radio transmitters linked to the ARGOS satellite system were deployed to increase the sample size in the study area. The primary goal of my project was to describe seasonal home range size and distribution and to examine fine-scale movement patterns of grizzly bears in the core development area and to identify key habitats in order to model potential impacts of hydrocarbon-extraction activities and assess the potential for anthropogenic disturbance and increased mortality risk on grizzly bears. Using the latest advances in GPS technology and Geographic Information Systems we quantified the spatial and temporal movement patterns of grizzly bears in the Mackenzie Delta oil and gas exploration and development project area and assessed the levels of risk posed by increased human activities on bears that occupy home ranges in areas around or adjacent to existing and proposed production facilities and associated pipelines. The objective was to increase the sample size to ca. 20 grizzly bears per year covering all sex and age classes with emphasis on resident adult females which form the reproductive core of the population. Levels of risk were assessed for different sex, age, and reproductive classes of bears using scenario-based testing. Potential impacts of mortalities resulting from exploration and development activities were assessed in relation to their impacts on the local and regional populations of grizzly bears using population projection models.

An aerial view of the Mackenzie Delta and the Ikhil pipeline that supplies gas to the town of Inuvik.

To augment our understanding of the ecology of this population, we examined carbon and nitrogen isotopes in hair and claw samples to explore the utility of this method for understanding the diet of the bears and thus provide greater insight into possible management regimes to reduce development impacts. The results of this project will provide the information required to develop protocols for improving grizzly bear management and sustainable harvest and preventing regional grizzly bear extirpation or significant population declines in the face of increasing resource extraction and human activities.

In addition to academic pursuits, I have worked as an ecological consultant for Dillon Consulting Ltd. and as a wildlife biologist in Banff National Park. I also participated in a Tiger Distribution study in Taman Negara National Park in central Malaysia. I have traveled extensively in Canada, the United States, Caribbean, Africa and Asia. I enjoy photography, hiking, canoeing and am an avid fly-fisherman. 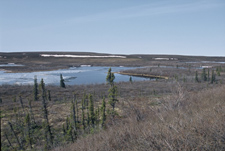 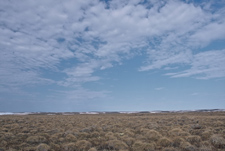