The ecology of polar bears in relation to sea ice dynamics- Ph.D. project

My research focused primarily on developing methods to assess and predict the effects of sea ice dynamics on polar bear populations. My thesis examined various aspects of polar bear ecology in relation to seasonal and long-term changes in sea ice composition. I focused on polar bears in 2 regions of Canada that are currently facing climate induced changes to sea-ice habitat: western Hudson Bay, Manitoba and the Beaufort Sea, Northwest Territories. 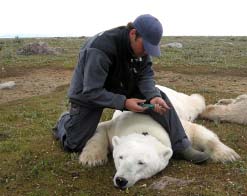 In the Beaufort Sea I examined the use of blood biomarkers to assess the fasting physiology of polar bears. Blood samples collected during the mid 1980s were used for comparison with samples collected during current research programs to determine if there have been changes in polar bear feeding patterns during time periods differing in environmental conditions. In addition, I conducted research on the diet composition of polar bears in the Beaufort Sea using stable isotope analysis. In the past, dietary analyses for polar bears have relied on opportunistic observations and surveys of kill sites. However, polar bear habitat in the Beaufort Sea occurs in remote localities that are logistically difficult to access during most times of the year, making it hard to estimate dietary changes at a seasonal or inter-annual time scale. To overcome these difficulties I used stable carbon and nitrogen isotope analysis to help determine the feeding ecology of Beaufort Sea bears and develop strategies to monitor their future diet. 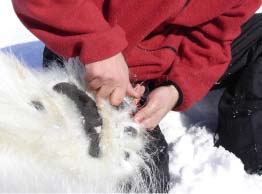 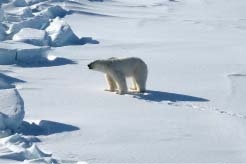 A polar bear on the sea-ice in the Beaufort Sea