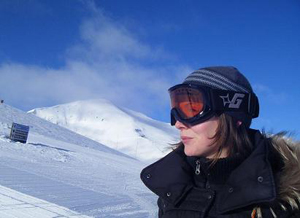 Marie has started a postdoc in August 2014 at Dalhousie University where she will be working with Dr. Joanna Mills Flemming  for the Ocean Tracking Network. She will be developing new methods to study the movement and behaviour of marine animals. To stay up-to-date with Marie’s work, visit her personal website.

Movement is essential for species to survive. It allows individuals to disperse, find food, find mates, and escape predators. Although movement is important to individuals, it comes at a certain cost, and many species have evolved movement strategies that maximize the net benefits (benefits – costs).

My research focused on the movement strategies polar bears, and other northern species,
use to find food and to cope with the dynamic movement of the sea ice they live on. My
specific goals were to:

1) develop new ways to use movement data to identify what strategies animals used to
find prey and assess which strategies polar bears (as well as barren ground grizzly bear
and woodland caribou) use; and

Most of my work was based on developing models that can be used to infer behavioural strategies using movement data collected through satellite telemetry.

For my PhD, I was co-supervised by Drs. Andrew Derocher  & Mark Lewis.

For my MSc I have developed a photo-identification method for narwhals and wrote a  computer program to accelerate the identification process. I was supervised by Dr. Hal Whitehead at Dalhousie University and this  work was done in close collaboration with Marianne Marcoux  from McGill University.

For my BSc honour project I also worked on the photo-identification method, but with
long-finned pilot whales. I also had the opportunity to participate in a variety of research  projects, such as behavioural work on sperm whales and little-brown bats.