Polar bears (Ursus maritimus) have a circumpolar distribution, the southern limit of which is determined by the annual distribution of sea ice during the winter (1). Polar bear life history is intimately linked to the sea ice environment, with sea ice providing the platform from which bears hunt, travel, mate, and in some areas den (2). Over the last 20 years, in association with climate warming, there have been significant declines in both the spatial and temporal extent of sea ice cover in the Arctic (3,4,5,6,7). It has been suggested that spatial and temporal changes in the sea ice environment will result in reduced availability and abundance of the polar bears primary prey, seals (8). In turn, reduced prey availability has the potential to influence the life history of individuals (growth, reproduction, and survival) (9) and thereby the population dynamics of polar bears.

The effects of reduced availability of prey are already becoming evident at the southern limit of the polar bear range in western Hudson Bay. Polar bears in this area are forced ashore during an extensive ice-free period each summer in which bears fast for up to 4 months living on stored fat reserves. Increasing spring temperatures and earlier sea ice break-up dates have extended this period and resulted in significant declines in the body mass of adult female polar bears (10,11). Declines in individual phenotypic quality (eg. body mass) will have an effect on population recruitment, as lighter female polar bears produce smaller litters and lighter cubs (12) that are less likely to survive (13). This is just one example of how sea ice-mediated changes in individual phenotypic quality could influence polar bear life history traits and population dynamics.

I am originally from Winnipeg, Manitoba where I completed my undergraduate degree in Zoology at the University of Manitoba. I began working in western Hudson Bay 10 years ago as an undergraduate student doing research on arctic and red fox den site selection. In April of 2001 I moved to Edmonton, Alberta to pursue a Masters of Science at the University of Alberta with Dr. Ian Stirling, focusing on polar bear maternity den site selection in Western Hudson Bay. After I completed my Master’s work I continued to work on polar bears with Dr. Stirling, this time as a wildlife biologist for the Canadian Wildlife Service conducting polar bear research in the Beaufort Sea and western Hudson Bay. In January of 2007 I also began my Doctoral studies at the University of Alberta. 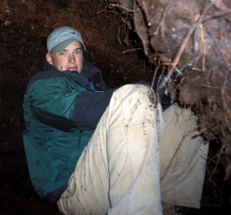 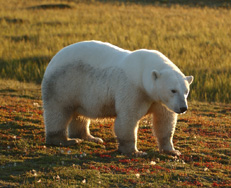 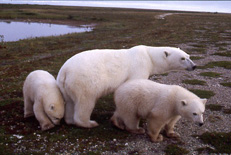 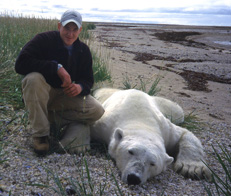